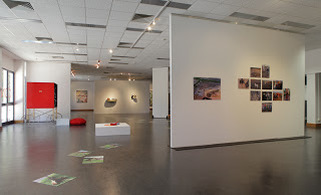 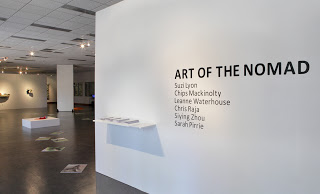 Collaboration with Siying Zhou
ART OF THE NOMAD exhibition
Chan Contemporary Art Space Darwin NT 2012
ABC 7.30 NT
Link to story Art of the Nomad
On the Move- Travel Practice of the Nomads

Sarah Pirrie, Darwin 2012
The Northern Territory has a restless, aspirational psyche. It’s preoccupied by notions of the frontier and the city’s place on the fringe of South East Asia’s global economic machinations, be it considerations of future suburban growth, new townships, the deployment of US marines or projected mining operations. Contrast this bundle of nervous energy with the sustained dynamics of the region’s Aboriginal people and Environment. Change here cannot be made manifest through a mere number plate slogan. It requires a travel practice  which negotiates the ancient past with today’s and tomorrow’s generation, all existing simultaneously in seemingly impossible alignment.

It is here we confront the travel practice of territory artists and identify how their activity provokes important considerations of the relationships between time and place. Whether using GPS technology or undertaking the simple act of walking, both local and incoming Territory artists are Industrialised nomads. More than a mere expedition from the centre to the periphery, travel as it relates to the Territory Nomad fulfils a genuine need for spatial and temporal connectedness. To begin travelling is to acknowledge a starting point and a destination, inviting a conscious acknowledgement of past, present and future and a subsequent intimacy with subject and place.

Bronwyn Wright, Ian Hance, Bill Davies and the response collaboration of Trevor Jenkins’ 2012 Scarecrows by Siying Zhou and Leanne Waterhouse all acknowledge their nomadic underpinnings as they pass through the Northern Territory and give pathos to moments of change. Each has a travel practice which captures the junction between the conceptual frames of their artwork and the transitory physicality of place.
In our preordained environment, local sites often provide an opportunity to rethink relationships to place while expressing interconnectivity with the rest of the world. Bronwyn Wright’s 2005 earth drawing Running Dog and Ian Hance’s 2012 on-site installation Signals from the frontier resonate within this exhibition as still images or archival fragments of the main event. For Hance the early car wrecks signal a reference to past histories and impending loss as the crumpled metal skeletons make way for new suburbs or dissolve into the earth in a salt corroding reckoning with Nature.

Both Hance and Wright use Global Positioning Satellite technology to assist in their investigative and making processes. This global connectivity also illustrates the ephemeral reality of place. Hance’s research of pre-Cyclone Tracy car wrecks leads him to Leanyer Swamp rekindling memories of Wright’s footprint and extensive use of this site. Meaning of place remains eternally linked with personal counters and guides.

For Bill Davies’ and Trevor Jenkins the artists’ walking presence is realised through the art making process. Davies’ horizontal drawings manifest his journey within their construction and undulating presence. Davies’ travel is one which is actively experienced, as demonstrated by his various work boots aged with wear. Accompanying this are his walking tools; walking and painting sticks dipped in paint. As a contact sport Davies’ traces and retraces marking and dancing with time and place.
Encapsulating a true travel practice Trevor Jenkins invites a collaborative spirit and an active community response through his ephemeral ‘rubbish sculptures’. In this exhibition, artists Siying Zhou and Leanne Waterhouse recreate Jenkins walking trail through a documented tableau. Trevor Jenkins is a local artist and homeless advocate who walks each day collecting ‘rubbish’ which he ritualistically piles by the side of the road creating ‘scarecrows’. These roadside memorials are extremely popular with Darwin residents and invite open discussion and free opinions about all our travel practice.

Through these and other travellers we re-evaluate the contribution people make to place and consider that a moment can be instantaneous as well as the culmination of a lifetime’s achievement.